A story on the BBC web site presents the results of some durability testing on digital media cards. They took five formats commonly used in digital cameras – CompactFlash, Secure Digital, xD, Memory Stick and Smartmedia – and then subjected them to a number of tests that would destroy most electronic devices, and defintely destroy regular film! 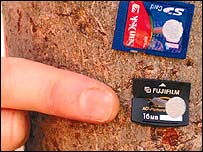 The tests that the cards survived were:

Having survived all of that, they then took it up a level and tried a sledgehammer as well as nailing the cards to a tree. Unsurprisingly, none of the cards survived these tests!